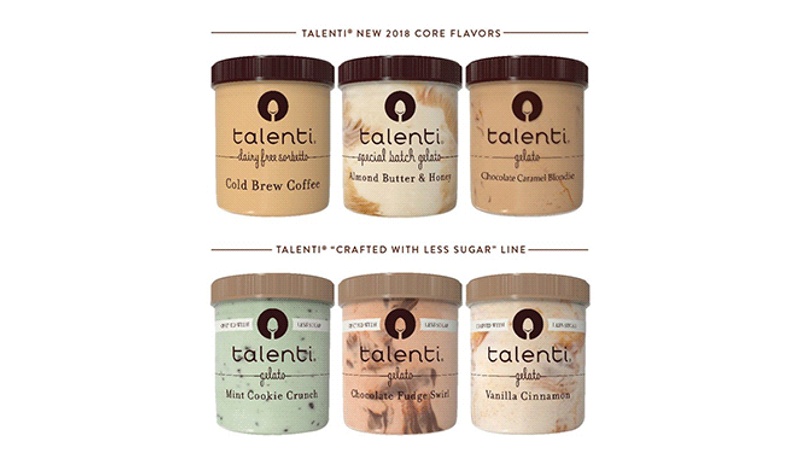 ENGLEWOOD CLIFFS, N.J., February 7, 2018 - Talenti® – maker of the best-selling gelatos in America – today released the new Crafted with Less Sugar flavor line that has half the sugar and less fat compared to regular ice cream and 120 calories per serving. Made with the sweetening power of monk fruit, the new line offers consumers better-for-you gelato options without compromising on taste, and features three decadent and delicious flavors:

The Talenti Crafted with Less Sugar line is made with the sweetening power of monk fruit – a small melon grown in southeast Asia. True to the Talenti focus on craftsmanship, these new flavors include indulgent chunks and decadent swirls, and are slow cooked for an unmistakable taste.

"Our new flavors are inspired by our fans, who were looking for a better-for-you gelato option with half the sugar but the same delicious taste and texture they've come to know and love," said Josh Hochschuler, founder of Talenti. "And with each new flavor, craftsmanship is still at the heart of our brand. We create unique recipes that source the finest ingredients from throughout the world."

Also new this year, Talenti adds three new flavors to its classic line up, including:

The six new flavors are available in grocery stores nationwide for a suggested retail price of $4.99-$5.99 per pint. With these new additions, consumers have 40 total gelato and sorbetto flavors to select from in the Talenti flavor portfolio.

The complete Talenti line of gelatos and sorbettos includes 40 flavors:

Talenti began as a gelateria in 2003 and has since grown into the best-selling packaged gelato in the United States. A wholly-owned subsidiary of Unilever, Talenti is committed to using artisanal methods and uses only the finest, carefully sourced ingredients – Belgian Chocolate, select coconuts from the Philippines and dulce de leche from a classic Argentinian recipe are just a few of the many fine ingredients used to create Talenti gelatos and sorbettos. Both Talenti® gelatos and sorbettos showcase our commitment to providing frozen desserts that taste amazing.

Unilever is one of the world's leading suppliers of Food, Home Care, Personal Care and Refreshment products with sales in more than 190 countries and reaching 2.5 billion consumers a day.

Unilever employs approximately 8,000 people in the United States – generating more than $9 billion in sales in 2016.

The USLP creates value by driving growth and trust, eliminating costs and reducing risks. The company's sustainable living brands are growing 50% faster than the rest of the business and delivered more than 60% of the company's growth in 2016.

Unilever was ranked number one in its sector in the 2016 Dow Jones Sustainability Index. In the FTSE4Good Index, it achieved the highest environmental score of 5. It led the list of Global Corporate Sustainability Leaders in the 2017 GlobeScan/SustainAbility annual survey for the seventh year running. Unilever has pledged to become carbon positive in its operations by 2030.

For more information on Unilever U.S. and its brands visit: www.unileverusa.com.