Why soil matters and how we can save it

Soil is failing across the world: every five seconds a soccer pitch of soil is eroded, and it’s estimated that by 2050 around 90 % of the Earth’s soils could be degraded. What does this mean for people and planet, and what can we do to restore a healthy balance to the soil we need to survive?

Disclaimer: This article was first published on nationalgeographic.com. This is paid content for Unilever. The editorial staff of National Geographic was not involved in the preparation or production of this content. 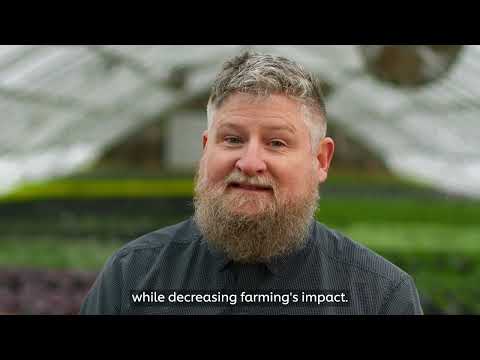 Watch: Why soil matters and how we can save it

A worm burrows its way through the dark earth, ingesting particles of soil and expelling nutrient-rich casts in a constant forage for food. Charles Darwin described earthworms as one of the most important creatures on Earth. Worms are critical to soil health, and without soil Planet Earth would be little more than a lifeless rock. So why is it that most of us take the earth beneath our feet for granted?

We might imagine soil as endless and indestructible: it is neither. Only about 7.5% of the earth’s surface provides the soil we rely on for agriculture, and it is remarkably fragile. Topsoil is used to grow 95% of our food, and it is disappearing ten times faster than it is being replaced: America’s corn belt has already lost much of its topsoil, threatening livelihoods and communities as well as food supply. The reality is that it takes thousands of years to create an inch of fertile topsoil, but it can be destroyed in minutes.

Healthy soil is a dynamic living ecosystem: a complex combination of minerals and organic matter containing air, water and life. Worms are not alone in the ground, just a gram of dirt can contain as many as 50,000 species, all interacting with each other to keep their soil habitat healthy and productive.

The activity of these organisms, the type of rock particles, the volume of organic matter, and the proportion of air and water all combine to create hundreds of different types of soil. These range from loose sandy soils to waterlogged peats to the beautifully balanced loam that is so well suited to agriculture. But human activity is destroying the balance and one-third of the world’s soil is already degraded.

Soil degradation, where soil loses the physical, chemical or biological qualities that support life, is a natural process but it is being accelerated by human activity. Pollution kills microbial life in the soil; deforestation and development disturb soil structure making it vulnerable to erosion; soil compaction associated with farming and urbanisation squeezes the air out of the ground and prevents it from absorbing water. Meanwhile, climate change continues to dry the ground: three-quarters of Spain is at risk of becoming desert.

But perhaps the biggest threat to soil is intensive farming. The need to feed a growing population and drive greater efficiency has sacrificed natural balance for increased yields. Monoculture farming, where one crop is grown repeatedly on the same ground, drains the soil of specific nutrients and allows pests, pathogens and diseases to thrive. The pesticides and fertilisers used to counter these problems come with significant drawbacks. Excessive use of pesticides reduces vital biodiversity; the addition of nitrogen fertiliser speeds up the breakdown of organic matter, starving the soil’s microbial populations.

Even the plough, often considered one of history’s great inventions, can be bad news for soil. Tilling breaks up compacted ground, controls weeds, and incorporates organic matter, but we now understand how it also damages soil structure, dries out topsoil, and accelerates erosion. Similarly, the age-old practice of irrigation, when overdone, increases the volume of salt in the soil, damaging its biodiversity, water quality and productivity. As a result of such destructive practices, in Europe alone, around 70% of the soil is considered unhealthy.

This matters, because without soil we cannot survive. Healthy soil is the root source of a livelihood that sustains farmers and communities all around the world: good soil produces good crops that deliver a good income that enables families to flourish. But it’s more than this.

Soil filters the water we drink, grows the food we eat, and captures the carbon dioxide that causes climate change. Soil is the largest carbon sink after the ocean and holds more carbon than all terrestrial plant life on the planet. But when we damage the soil, water systems become disrupted, food production declines, and carbon is released into the atmosphere. Any one of these essential soil functions would be reason enough to preserve our soil: taken together they are a compelling argument for urgent action.

This is what the 26th United Nations Climate Change Conference – COP26 – has called for. This two-week-long meeting in November 2021 brought together government, industry and NGOs to commit to the accelerated actions needed for the world to achieve the goals set out in the Paris Agreement and the UN Framework Convention on Climate Change. Alongside fighting pollution and regenerating our forests, oceans and biodiversity, COP26 also highlighted the importance of preserving soil health as crucial to all life on earth: soil was stressed as something all stakeholders needed to take action to save.

So, how can we save our soils?

Many of the ways to reduce and even reverse the damage are reliant on changes to current agricultural practices. By not tilling the land and reducing our reliance on pesticides and fertilisers, soil starts to recover. Replacing our reliance on monoculture with a return to crop rotations gives soil time to replenish the nutrients needed by plants. Agroforestry could take this further, growing a variety of plants together in ways that their biological systems support each other and help soil to flourish.

Similarly, promoting soil fungi helps plants extract nutrients from the soil while increasing resistance to disease and building healthy soil structure. These good practices could regenerate our soils which helps sustain livelihoods and local communities, and keep people and planet healthy: but they require big changes.

Inspiring a fundamental shift in the way we farm needs to be driven by both the consumer and the companies they buy from. Responsible companies, including Unilever, are making serious commitments to minimise the damage done to the soil, while actively working to regenerate degraded land. This includes encouraging and supporting suppliers to improve soil health through regenerative practices such as growing cover crops that protect and nourish the soil between harvests: in Iowa, a state that has lost half its topsoil in a hundred years, farmers using cover crops reported that their land weathered heavy spring winter rains better than their neighbours’ land.

Knorr, Unilever’s largest food brand, is looking to expand such practices. It has set a goal of growing 80% of its key ingredients following Unilever’s Regenerative Agriculture Principles by 2026.

Already, Knorr has partnered with Spanish tomato growers to use cover crops to improve soil health and reduce the use and impact of synthetic fertilisers; in the US Knorr is working with its suppliers to grow rice in ways that will reduce its demand for water and cut methane emissions. These are two of the many ongoing and planned projects as Knorr expands and scales up such projects while sharing its knowledge and inspiring others to transform the way food is grown.

Soil needs all the help it can get. It is a priceless, irreplaceable resource and key to sustaining all life on earth. Soil is struggling for survival but there is still time to rebuild our soils as healthy, productive, sustainable ecosystems. As the world learns to work together to preserve our oceans, our forests and our biodiversity, we now need to look to the ground. The humble earthworm can only do so much: it’s time for individuals, communities, companies and countries to help save our soils.